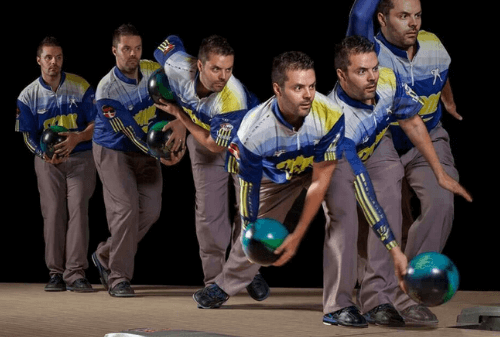 When you hear two-handed bowling, you might imagine a child holding the ball and throwing it with both hands or a woman who is not good at bowling throwing the ball slowly down the lane. Well, that is not the case anymore in bowling with two hands.

In fact, many players, including professional bowlers, are bowling with two hands.

It’s because learning how to bowl with two hands is more natural and comfortable, and all it requires is the right guidance, practice, and patience.

What Is Two-Handed Bowling?

The two-handed bowling technique is very similar to the one-handed technique. The main difference is the use of both hands, and the non-dominant hand is only used to support the bowler’s throw.

The use of two hands in two-handed bowling generates more spin naturally as the throw is executed without worrying about the thumb’s position or how it comes off. So, even beginners can easily take strikes and spares.

With two handed bowling, you can support the ball more firmly than with one hand because you do not use your thumb, and the ball does not come off or get caught too much when you release it, and the burden on your arm is reduced.

How to bowl with two hands

Here are some key factors that you should keep in mind while practicing two handed bowling.

First, check the “footwork.” Let’s practice until the ball is released with the image of taking a run-up for about five steps.

Hold the ball, hold it aside, and push your foot forward with the feeling of recoil. The smaller the steps, the easier it will be to gain momentum.

The non-dominant hand during the approach is used to support the ball’s weight, allowing the athlete to maintain the maximum rotation of the playing hand throughout the swing.

First, put only your middle finger and ring finger in the hole of the ball and hold it. At this time, do not insert your thumb. You don’t put your thumb because it makes it easier to spin the ball.

The way you hold your right hand is not much different from throwing it with one hand so that you won’t have much trouble.

However, with two-handed throwing, some people put their thumbs in at the beginning and pull them out at an early stage, so the trick is to start with an easy method. So, if you have a habit of putting your thumb in, that is also acceptable in two handed bowling.

Once you have the ball, the next step is to hold it aside. Place your left hand to support the lower part of the ball and use it as an aid.

At first, it may look like you hold it with your right hand only, but you will understand how to put more effort into it as you go along. Get the feeling that the ball you drop will roll naturally.

The action of dropping the ball is basically the same as throwing with one hand, but it is a bigger move because it is held aside.

However, you don’t have to swing around. Swing your arm to give momentum to the ball, much like a one-handed throw.

The main advantage of playing with two hands is the ability to release the ball, keeping the position of the shoulder line perpendicular to the specified path of the ball.

Since the player keeps both hands on the ball throughout the approach, the player does not suffer from excessive shoulder movements that can arise from over-activity of the non-playing hand.

With the middle finger and ring finger in place, throw the ball down as it is. If you drop it down, your finger will come off and it will be thrown cleanly.

When you let go of the ball, stretch your elbows and let go with a “slightly relaxed” feel rather than a complete weakness. If you weaken, the ball will just drop and you will not be able to move forward.

At first, you may put pressure on your right hand and it may look like a one-handed throw, but keep adjusting until you get used to it. After a while, you will get used to throwing both hands.

We have put together some simple tips to get you through step-by-step for those who want to know how to bowl with two hands.

And the key to becoming a professional two-handed bowler, you need to keep practicing.

Give momentum to the steps

To successfully throw with both hands, first, give momentum to the steps. You will lose momentum if you start with a too slow or too fast run-up. Find the rhythm in your run-up by practicing.

Don’t throw with just the strength of your arm

Since two-handed bowlers use both arms, it tends to be thrown only by the hand’s power. However, in reality, it is better to put your strength well while shaking your body.

If you throw it with just your arm’s strength, it may cause problems such as damaging your arm. Use your whole body as much as possible to swing.

In particular, many people throw only with the power of their right arm, but that is the same as one-handed throwing. So it is important to practice and learn how to put more effort into it.

Two-handed throwing has a higher “rotation speed” of the ball than one-handed throwing. Since it is thrown with force, the number of revolutions will increase naturally.

Control the throwing method, angle, and force applied, and be aware of the correct throwing.

What Are the Pros and Cons of Two-Handed Bowling?

It is important to keep in mind when making the decision to try out two-handed bowling, as all techniques have their advantages and disadvantages.

Advantages of the two-handed technique

In many ways, the two-handed bowling technique is more beneficial than the more common, one-handed technique.

Because the ball is being supported by both hands, the weight is distributed more evenly between both sides of the body, leading to less stress on the bowler’s dominant shoulder.

The weight is also spread between the two hands, which means less arthritis, calluses, and bowling-related pain in the fingers, thumbs, and knuckles.

Disadvantages of the two-handed technique

However, since there is less rotation in the knees involved in the two-handed technique, there is less grinding that single-handed bowlers can experience.

Instead, the rotation occurs in the trunk of the body, which can emphasize the spine that occurs.

This can be alleviated with frequent stretching and flexibility exercises.

Anyway, you can easily backswing when throwing with both hands if you are aware of the forward-leaning posture.

How to increase ball speed in two handed bowling?

If you’re just starting two-handed bowling, you may not be able to speed up. However, you can quickly increase speed by learning these simple steps.

Speed ​​up your approach

It is no exaggeration to say that your “steps” are the most important part of throwing in two hands. Think about why steps are so important.

Let’s say you are in a car. What happens if you throw something out of a stopped car? -Of course, things fly normally. Nothing strange happens.

Now, let’s say the next car is on the highway (100km/h). What would happen if you throw something out of this car? The answer is, “The released things fly at a tremendous speed.” In other words, the car is giving energy to things.

Let’s replace this with bowling. The faster you move, the more energy can energize the ball. So, it is important to increase the “speed of approach.” If the speed at which you make run-up increases, the ball will naturally gain momentum.

If you walk slowly, you will inevitably run out of speed. Practice adding a good rhythm to your run-up.

In addition, if you swing while running and put effort into the “last step,” it will be easier to get on speed.

Let’s return to the example of a car. What happens to the people inside if the running car suddenly brakes and stops?

If you don’t fasten your seat belt, you may be skipped forward.

So what happens if you step on the same brake gently? -It doesn’t affect the people inside, so it’s comfortable.

From this, you can see that the steeper the stop, the more force is applied to the people inside.

If you want the ball to pop out vigorously, it is better to stop suddenly and throw just before you stop.

You need a power step

Let’s return to the example of a car. What happens to the people inside if the running car suddenly brakes and stops?

If you don’t fasten your seat belt, you may be skipped forward.

So what happens if you step on the same brake gently? -It doesn’t affect the people inside, so it’s comfortable.

From this, you can see that the more force is applied to the people inside, the steeper the stop.

If you want the ball to pop out vigorously, it is better to stop suddenly and throw just before you stop.

The balance between muscle strength and skill

Strengthening is also an important factor for throwing with both hands. Bowling requires “strength” regardless of how it is thrown.

If the speed does not increase even after reviewing the speed of the run-up and the stepping strength, suspect a fundamental lack of muscle strength.

The strength of the lower body is important when making a run-up. It would be best if you also had the strength of your arm to hold and throw the ball. Do regular exercises to increase muscle strength, and that will also help you increase ball speed.

So many people may be wondering if there is no problem with throwing two hands according to the rules. There is no rule prohibiting two-handed throwing, and it is a throwing method that is also accepted in professional bowling competitions.

Recently, many players have improved their scores by throwing both hands. In recent years, the number of two-handed throwers has increased.

It was rarely seen in the past, but it has spread in many countries since Australia's Jason Belmonte (who was among the first bowlers to gain worldwide recognition for using the two-handed approach style) won the gold medal at the 2004 World Championships.

Two handed vs one handed bowling which is better?

There is no single formula to choose between one-handed and two-handed bowling. Players who have used the one-handed style throughout their bowling career have switched to two-handed, and their game has improved significantly.

Meanwhile, some players may have used the two-handed approach early on. The best way to find out which method is best for you is to try both and get an idea of which one suits you best.